CAST YOUR VOTE OR VOTE YOUR CASTE? CASTE POLITICS IN TAMIL NADU, INDIA

There is a famous saying in India, “you don’t cast your vote but you vote your caste” and it holds true in all the Indian elections. Castes in India are endogamous units of people synonymous with the term “ethnic” groups in other parts of the world. The entire population in India has organized itself into various castes and arranged themselves in a social hierarchy. Over the course of the past six decades, each caste has become its own political unit with leaders, registered associations, members etc. and they function to serve the interests of their caste members and to represent the caste in all matters necessary.

While they appear to function and behave as a large extended family, they are viewed as viable “vote banks” by the politicians of India. Vote bank is an Indian term for a group of people who have a common identity or goal and can be relied upon to display solidarity while choosing whom to vote for.


Although not an explicit strategy, every political party strives to earn the support of the various caste groups that live in their constituencies. It is similar to Hillary Clinton appealing to the cause of the veterans or Donald Trump earning the support of the middle class voters in the US, but the difference is that when a caste allies itself with a political party, it is “understood” that almost everyone belonging to the caste would vote for the supporting party. These vote banks indirectly play a crucial rule in influencing the political discourse, policy making, candidate selection for constituencies, financial planning etc. of each state in India.

Tamil Nadu is a south Indian state which is historically known for its strong adherence to caste system and caste-based politics. The interplay of caste and politics are highlighted when elections are around the corner.

In May 2016, the state assembly elections were conducted in Tamil Nadu and I followed the election affairs to highlight the areas in which caste influence played a vital role. The important process of any election is the grouping of allies, announcing a manifesto (a declaration of plans and policies), selecting candidates for each constituency, campaigning, poll day and results.

In Tamil Nadu, the three major political parties are DMK, ADMK and DMDK and their ideology is not caste-based. However, there are many other political parties formed directly by castes such as the Vanniyars, Dalits, Mutharaiyars, Nadars etc., and there are parties that are formed around minority Muslim groups. These parties form alliances with the three major parties.

The alliances formed between the above mentioned parties for the 2016 elections reflected the caste- affiliations. Each party collected their caste based vote banks based on their allies. (The complete details of alliances and names of the parties can be found here).

Manifestos are a good place to analyse the influence of castes in policy making; In April 2016, numerous booklets were dropped from door to door by different parties to ensure that the manifesto of each party reached every possible voter. All the major parties accused each other of “intellectual theft” regarding their policies, and it was indeed evident that it was difficult to distinguish a party from another in terms of their policies. In most manifestos, there were chapters entitled “Welfare of backward and schedules castes” and “Welfare of minorities” which addressed the caste based policies and schemes that would be implemented by each party after winning the elections. 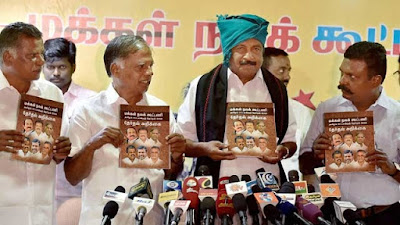 At this point it is important to note that the castes in India are organized into various categories such as “backward”, “most backward” and “scheduled” based on their historic socio-economic status. Each category of castes is given special benefits by the government so they can achieve “development”. The process is known as a reservation system according to which admissions in schools, government jobs, and sections of government schemes are “reserved” in various percentages for the different categories.

However, the government ceases to provide the benefits for families whose annual income exceeds a mandated threshold, thereby excluding the “creamy layer” (Rich families) of each caste from the reservation system.

Collectively, all of the parties vowed to increase the “percentage” of reservations and the threshold income, in order to gain the votes of a richer section of all castes. Additionally, DMK promised to implement the caste-based reservation system in the private industry sector. It also promised to revise the “list” and “upgrade” the categories of several castes so that they could enjoy more benefits. PMK, on the other hand, promised that the welfare and rights of the religious minorities like Christians and Muslims would be specially protected, some religious convicts released on mercy, and “manual scavenging” (latrine cleaning) by certain castes abolished.

At this juncture, each caste would decide the party they wanted to vote for based on the policies they would benefit the most from. Each party strategically earned itself a vote-bank through such policy declarations.

Finally, the parties appealed to the cultural and ethnic identity sentiments of the voters by using highly emotional political rhetoric. PMK is known for their ‘80s rhyming campaign slogan “The votes of Vanniyar caste is for no-one else”. Another caste-party claimed that they are “children of the sun” and that no one can defeat them while another party retorted by asking “Why can you not beat the summer heat but need AC, if you are the children of the sun?”

Such witty and emotionally charged discourse between parties appeal to the ordinary citizen who feels the need to take sides to protect his identity. However, within the last decade, there has been an increase in the number of caste associations that aim for caste solidarity, which is also the aim of political parties during their election campaigns. The politicians might break ethnic barriers by dining with various caste members, drinking tea with the people on the road, naming newborn babies. The most common strategy is delivering hair raising speeches on unity and solidarity.

The election results were announced on May 19th 2016 and in a surprising turn of events, many caste-based parties actually lost the elections while there were only a few strong caste-based party leaders who were elected. Thus, there might be a change in the people’s preferences to caste-based politics in Tamil Nadu.


Nevertheless, politics in Tamil Nadu is still dominantly caste-driven, and castes participate in politics by forming official caste organizations, mobilizing funds, doling out free memberships to their caste members, implementing strict endogamy in marriages, asserting their dominance and identity through communal violence, and slowly rising to power as a formidable vote bank after which they can demand for favours and policies in return for their loyalty as a vote bank.

Note from the Editor: Mowshimkka Renganathan is a new member of Poverty and Development Research Center at the Department of History and Ethnology, University of Jyväskylä. Her ongoing PhD research focuses on the caste-based reservation system in Tamil Nadu, India.