CLOSE BUT FAR: SOCIOECONOMIC MOBILITY IN A BRAZILIAN SHANTY-TOWN

A guest article by
Stephan Treuke

Salvador da Bahia, Brazil’s first capital until 1763, is a good example of socio-spatial segregation mirroring the expressive disparities within the population’s income and housing conditions. There is the common center-periphery dichotomy, where the middle and upper class have mostly settled in the central areas while the least fortunate tend to live in the outskirts of the city. Then there are the borders between socio-economically distant classes that have emerged both in central and peripheral regions, fostering the city’s socio-spatial fragmentation in a smaller scale.

These spatial constellations have aroused increasing attention of Brazilian sociologists, inquiring whether the geographic closeness promote interaction between classes and help to attenuate social distances, or whether residential segregation generates a more conflictuous relationship and nurture territorial stigmatization.

Drawing on empirical data collected in Nordeste de Amaralina, a centrally-located shanty-town located in an area of affluent condominiums (Orla Atlântica Norte), I wanted to find out whether the opportunities of interaction between classes, particularly in the realm of employment relationships, could be verified. I asked twenty randomly selected interviewees to provide information about their social networks in various spheres of sociability: family, neighborhood, friendship/acquaintanceship, work, studies, associative life, religious associative life and leisure, in situations of job seeking and the provision of financial, social and emotional support. The main objective of my research was to analyse the so-called “inhabitants portfolios of risk management” or the ethnographic data on family livelihood strategies, and networks between classes and communities. 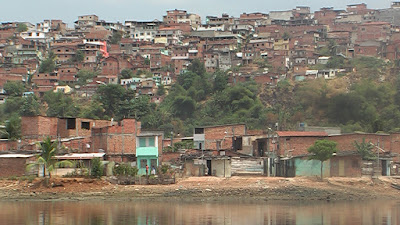 Since the 1960s the neighborhood’s strategic proximity to the nearby affluent summer houses and condominiums of Rio Vermelho, Horto Florestal, Amaralina has attracted immigrants coming from Bahia’s poor rural hinterland regions. Gradually, this led to the region’s demographic densification and illegal land occupation, mostly by informal settlements.

The mostly precarious housing situation together with above-average unemployment rates is made worse by endemic violence and insecurity which are due to local drug conflicts and repressive police incursions. The harsh reality reflects on my interviewees’ social networks and economic integration, which underline the strong relevance of what I call the “primary units of socialization”, like family, neighborhood and friendship/acquaintanceship.

Primary social ties, based on frequent contacts between rather close relatives, neighbors and co-residents, are important in short-term socioeconomic activities and are mobilized in situations of emergency and daily adversities, including drug dependence and unemployment. Moreover, these bonding ties serve as main communication channels transmitting valuable information about employment opportunities, mostly located in the low-skill informal service sector, to in-group members.

According to the in-depth interviews, the geographical proximity to the middle- and upper-class condominiums is seen as positive as far as economic integration is concerned, and the short distances to work are regarded as an advantage compared to the more peripheral neighborhoods. Like Jose, a 34-year-old condominium guard affirms, the economic opportunities mostly belonging to the domestic sector offer good salaries and stable work conditions.

Among twenty interviewees, four have jobs in the nearby affluent condominiums. In this sense, the two key-persons employed as security guards in the upper-class condominiums have an important bridging function. They have valuable job information and access to privileged contacts. Hence, they intermediate different low-skill informal employment opportunities like car washing and technical maintenance jobs that come up occasionally according to the demand of the wealthy condominium dwellers. “Almost everyone in the condominiums needs some small daily services, since the patrão (boss) comes home late from work and might be grateful for cheap car-washing or maintenance services”, Luiza, a 45-year-old maid contests.

Nevertheless, apart from these amplified employment opportunities the social distance between classes prevail in all the other spheres of sociability. “Our high class condominium neighbors don’t rely on people coming from our favela, given the bad housing conditions and a deteriorated public image. They mostly stick on their own and conversation remains restricted to work issues.” (José Antônio, 50 years old gardener)

A wide range of social and cultural associations spread throughout the neighborhood, like community centers, capoeira and dance groups, football clubs and philanthropic third sector organisations, among others assume a crucial paper in the childrens’ and adolescentes’ socialization processes and strengthen the communitary identity. Nevertheless, these institutional-based networks mostly promote intra-groupal cohesion and solidarity without linking their group members to extra-local networks which possibly could give access to important job referrals.

The social networks built in the sphere of sociability religious associative life connect members of the same church congregation, strengthening the intra-groupal solidarity and providing a wide set of material and immaterial resources. These resources are mainly distributed in the context of social and philanthrophic communitary activities realized in the neighborhood, offering free lawyer counseling, health services and food baskets. For the majority of the interviewees, being part of a congregation turns out to be crucial for coping with economic deprivation. 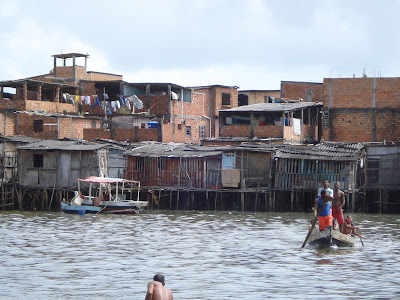 Apart from being a social safety net, in three cases, being a member of a church has increased their economic integration, though on the rather unstable informal labour market. Acquiring informal jobs often depends on having key contact persons within one’s institutionally-based networks. The key contacts often relay privileged information and contacts about local job opportunities. “In my local congregation, almost everyone relies on contacts drawn within the Assembleia de Deus church, as most of our members are hard-working, trustful people. Whether you find a job is just a matter of frequenting the daily congregations.” (Marta, 57 years old grocery owner)

In a way, the social segmentation and the class-hierarchized access to urban infrastructure and services (transport, hospitals, schools, leisure activities) limit inhabitants’ social interactions on the local level. This restriction within neighborhood boundaries leads to localism and make social ties more confined: “This neighborhood is quite self-sustaining and everything we need is located within our boundaries. My closest friend all come from the same street corner and I usually don’t trust people not coming from here, you have to know who to trust!” (Anna, 37 years old, informal street vendor)

Like in many lower-class neighborhoods of Salvador, public schools suffer from the State’s long-term disinvestment. Drawing from the adolescent interviewees’ self-report, public schools within neighborhood boudaries were unanimously depicted as potentially dangerous places, due to the presence of rival gang members and adolescent drug traffickers. Among three interviewed adolescents, only one confirmed that school served as his prime socialization unit in the process of social network building: “You have to be careful who you’re hanging with, since most of our classmates pursue gang activities. Poor school quality and failing job perspectives make it much easier to engage in drug business, bringing social status and fast money.” (Antônio, 15 years old student).

Moreover, the class-stratified access to public recreational spaces that could promote cross-class interactions (shopping malls, plazas and public parks etc.) in many cases practically exclude the Nordeste de Amaralina dwellers close by because they don’t have enough money to participate in those spaces, and thus fear stigmatization. “The last time I entered their fancy shopping mall, I permanently had to deal with security controls and scared faces, even though I dressed up quite conveniently!” (Andreia, 19 years old student)

Thus, leisure activities are restricted mainly to local opportunities. The concentration of high-quality urban equipment (hospitals, private universities, sophisticated supermarkets etc.) along the main causeway Avenida Juracy Magalhães – the major dividing line between the favela Nordeste de Amaralina and high-class condominios of Horto Florestal – do not offer any locational advantages for the poor populations, except for the privileged access to public transport. The major field of leisure activities is the Praia de Amaralina, a close-by beach avoided by the middle and upper class due to the high frequency of assaults and robberies “Well, they have their condominiums with swimming pools, gyms and stuff, they don’t belong to our beaches. I think it is also because some adolescents assaulting in public streets have mostly scared the few that still visited our closeby beach” (Jacira, 61 years old unemployed).

Despite reduced sample size, my research offers an important insight into the rather ambigious relationship of cross-class interactions, oscillating between economic integration within the low-paid domestic work on the one side, and social avoidance due to residential segregation and social segmentation, on the other side. The idea that there would be an opportunity-enriching “symbiotic” environment, where socioeconomically distant populations live close to each other and cross-class interactions are encouraged within “vertically integrated institutional spheres”, doesn’t comply with the way Salvador is organized in a hierarchical way in terms of space and social sphere. Shiftings of residential segregation patterns have occurred in scale but not in function, and social distance is upheld spatially by the means of security devices.

While the local context remains important for social interaction and the mobilization of social capital, it is particularly the local school context that has a negative influence in the process of childrens’ and adolescents’ socialization and contributes to the internalization and reproduction of class division.

The affiliation to institutional networks impacts positively on the individual’s social and economic mobility. My study has confirmed the importance of the so-called brokerage positions in social relationships. They promote crucial information about job opportunities, whereas the “primary units of socialization” play an important role for the integration into the informal labour market.

At the same time, it seems that the social networks of family, neighborhood and friendship, with strong elements of localism and homophily, may reproduce and even reinforce poverty as they encourage segregation. This is particularly evident if there is less interaction between different social groups, and if there is low solidarity and trust within a neighborhood. 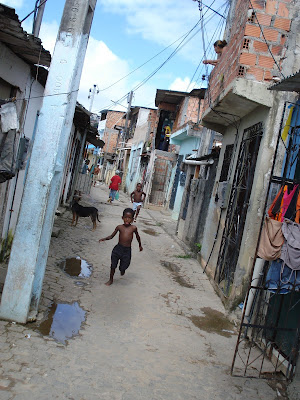 The Nordeste de Amaralina case demonstrates that high rates of crime and violence undermine the collective norms which support the neighborhood-level cohesion and weaken the community’s capacity to engage in informal social control, particularly when it comes to the supervision of deviant adolescents.

Poverty mitigation might be more effective if instead of individuals and households it targeted neighborhoods as a whole. It has become increasingly evident that area-based neighborhood revitalization programs that “bring the resources to the people” generate more positive spill-over effects than traditional individual and household-allocated welfare policies. Many policy initiatives grounded on social capital theory and their application to poverty reduction initiatives in Latin American cities have focussed on slum upgrading programs usually involving the mobilization of community support, the expansion of local economic opportunities and investments in (social) infrastructure while improving the interaction between citizens and the state.

However, macro-economic strategies remain crucial in order to overcome the favela inhabitants’ social vulnerability in a long term. Going beyond neighborhood-scale improvements, a more holistic approach to urban poverty should be given priority within public policies. These would entail a stronger regulatory state intervention into the labour and housing market systems in order to face the challenges arising from the transformations within the socio-productive paradigm of post-fordism. By the same token, the implementation of socially integrative programs widening the access to education and social services remain crucial at local level.